Ideally, Folio should have a single authentication and authorization system for all its components including Kafka so that everything could be configured and available in a single place.

To make this happen a custom security solution should be implemented for Kafka to integrate it with Folio authentication and authorization. The Folio should provide capabilities to easily integrate the new components with its security system.

However, the implementation of the custom solution should take more time than the usage of out of the box Kafka security features.

For that reason, the temporary Kafka security solution is designed.

It is designed for features that:

The temporary solution should satisfy the following criteria:

Kafka security includes the following areas. The preferred security feature is mentioned for each area in short:

See a description of each security feature and the rationale behind the selection below.

There are several cases that require authentication:

Out of the box, Kafka provides the following authentication approaches:

Out of the box, Zookeeper provides the following authentication approaches:

SASL/DIGEST-MD5 Zookeeper authentication should be used for the following cases:

Kafka ships with a pluggable Authorizer. The Authorizer is configured by setting authorizer.class.name in server.properties file.

AclAuthorizer is the out of the box Authorizer implementation that should be used in the temporary solution. It uses Zookeeper to store all the Acess control lists (ACLs).

To enable the out of the box implementation specify the following in the server.properties file:

ACLs are used to define rights to Kafka resources.

Kafka ACLs are defined in the general format of:

When a user passes SASL/SCRAM-SHA-256 authentication (preferred Kafka authentication approach for now), his/her username is used as the authenticated Principal for authorization.
Since the temporary Kafka security solution isn't integrated with the Folio security solution, for now, Kafka users should be created independently from Folio. The temporary solution doesn't assume mapping between Folio "system users" and Kafka users.

Kafka supports a way of defining bulk ACLs instead of specifying individual ACLs. The current supported semantic of resource name in ACL definition is either full resource name or special wildcard '*', which matches everything.
Example:

Principal “UserA” has access to all topics that start with “com.company.product1.”

ACL should be created for each Principle with the principle of least privilege in mind.

In order to add, remove or list ACLs the Kafka authorizer CLI should be used.

Example of Kafka user and ACL usage in Folio:

In order to import Marc records, the mod-data-import module needs Read access to Kafka Topic A and Write access to Topic B.

To reach this goal: 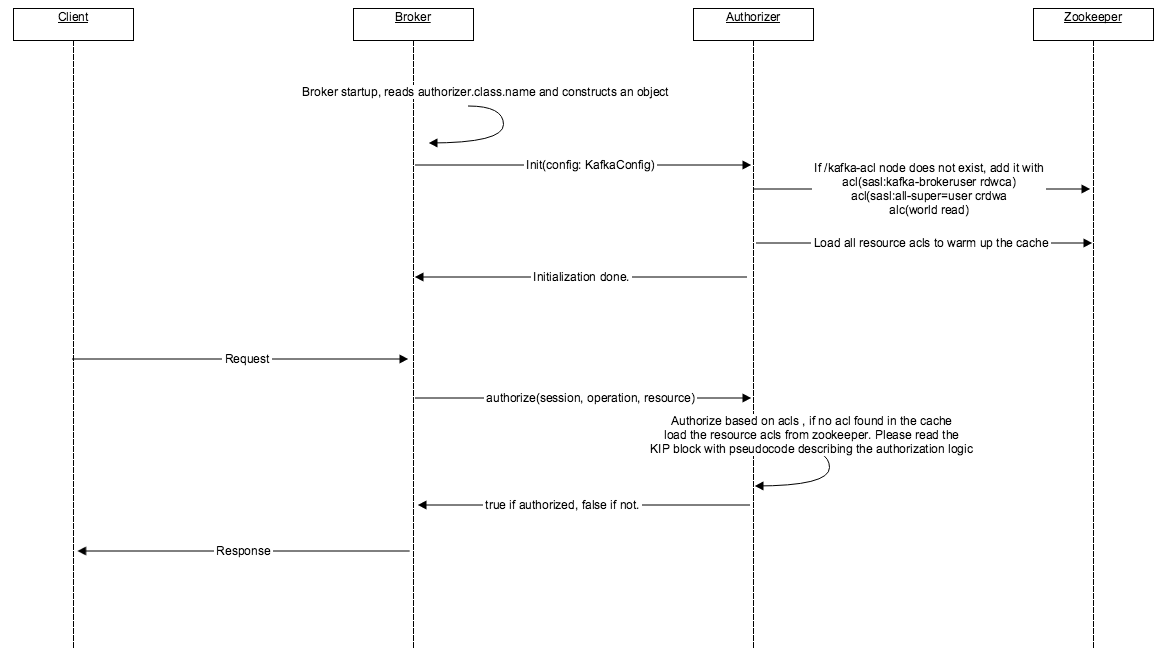 Apache Kafka allows clients to use TLS (SSL) for encryption of traffic.

SASL/SCRAM-SHA-256 (preferred Kafka authentication approach for now) should be used only with TLS-encryption to prevent interception of SCRAM exchanges. This protects against dictionary or brute force attacks and against impersonation if ZooKeeper is compromised.

It is the responsibility of the hosting providers to create, sign certificates for TLS and update Folio configuration to use them.

Note that there is a performance degradation when TLS is enabled, the magnitude of which depends on the CPU type and the JVM implementation.

The performance degradation though can be overcome by changing CPU type (scaling vertically) or increasing the number of Kafka brokers (scaling horizontally).

As result, Data at rest encryption is out of the scope of this solution.

For now, the 2nd option is preferred. It assumes the following:

A hosting provider is responsible for:

Folio community is responsible for: