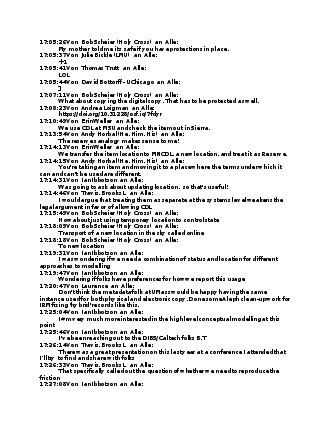 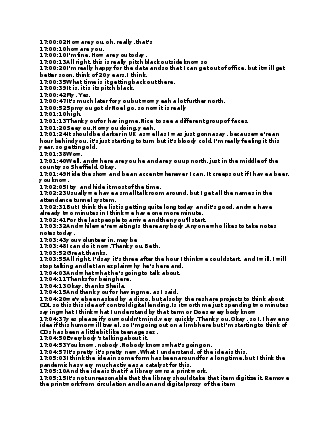 Library owns print. Digitizes the item. Removes the print work from circulation (and stores it securely) and loans the digital proxy of the item. Legality of the process has been tested in various courts, and the legality discussion is ongoing. Legal situation in Europe different than in USA. Ian’s organization has commissioned a report into the legality of CDL. And they’ll be publishing that and making it available to the FOLIO community.

They are working on the stories around CDL, and Ian wants to ask RA SIG how we would like to model the process of removing a print item from general availability. When you’re loaning a digital proxy of the item, would you want to circulate the item or would you rather the item was just represented as being out of circulation?

David from University of Chicago believes there is a FOLIO “restricted” item state for items that are not checked out, not available, and that do not allow requests.

It seems that we would make the print volume unavailable (whatever that looks like for individual institutions) or restricted, while turning the digital copy on or making it available. We don’t want both available at the same time.

Discussion on whether both are cataloged on same item, same holding record. Separate records for statistics and permissions, etc.

Discussion on whether digital item would be “checked out” via FOLIO circulation.

Discussion on whether the digital item is a separate copy or not.

Maybe going on and off course reserves is a metaphor for this process? Making the print volume restricted and turning the digital version on.

Some institutions have a separate CDL platform (Ares or ILLiad), but others may be thinking of utilizing FOLIO for this? Discussion that DRM (Digital Rights Management) most likely done through another system, not FOLIO. Some institutions already have platforms.

Laszlo from Stanford mentioned that their institution is working with CDL in the following way -- they have one item record, they didn’t create a separate digital record, and they don’t let it be viewed. Location was changed on the item to CDL. Handshake and DRM was done through discovery layer and backend. They didn’t use their ILS. Their items are restricted.

Print copy has single record. Either manage CDL outside the ILS, or build something into FOLIO that allows the CDL workflow to happen there. Flexibility for all members is needed.

Another possible way to look at it -- Paging request updates the item to paged and stops other request being placed. In this case you’d have a digital option, and if someone chose digital, it would update the physical item to restricted. Then it would be up to individual institutions if they had to physically retrieve print items from where they are being stored or not.

A CDL subgroup was created for members who want to participate in further meetings that will discuss this topic.

Question 1.  Related to lost items: does anyone know why it’s still possible to declare an item lost after it’s been aged to lost?

Aged to lost item is usually not really lost. It is an impetus to get the patron to return the item. It is possible that the patron will contact the library and say, “yes it is lost.” Then it is declared lost. That’s why it is still possible to declare it lost.

Aged to lost possibilities: patron ignores, patron brings item back, or they lost it and declare it lost

Question 2. What is the expected behavior here – if a staff member declares the item lost after it’s been aged to lost, should the aged to lost bill be cancelled and replaced with a declared lost bill?

Cancel aged to lost fees and replace with declared lost fees. It is possible to have a lost item processing fee on either or both.

Question 3. What is expected behavior when a claims returned is enacted – should bills associated with the loan be cancelled or is there a way to retain the bills and associated blocks on the account?

If already aged to lost, but patron changes item to claimed returned, then lost item fees/fines are suspended until the claimed return is resolved. Bill is retained but suspended. In fee/fine view the fee/fine is followed with the word “suspended” and there is a “suspended total” in fee/fine history. In user history you can see the suspended fee/fines. Doesn’t get counted in patron’s total fee/fine balance.

Question 4. An earlier chat leads me to believe that the “resolve claim” functionality may not yet be active, but what is expected behavior if you resolve a claim:

Question about documentation -- In Docs.FOLIO.org, has expected behavior like this been documented or are there plans to document this? Molly Driscoll will follow up with Erin Netiffee with the documentation group. Holly could add a shell of an explanation in the Docs area.

German reminder fee mentioned by Jana Freytag -- Holly said, actual cost stories are being worked on first. Then Holly will work on German reminder fee. She will be working directly with the German libraries to get it going.