This is a report for a series of Check-in-check-out test runs against the Juniper release.

Response Times (Average of all tests listed above, in seconds)

The following table shows the slow 75th percentile APIs taking more than 100 ms to return, and also comparing them against Goldenrod's.  Other than the 1-user test, starting with the 5-users test, all listed APIs are slower with GET automated-patron-blocks leading the way at 150% slower, while GET circulation/loans regressed up to 60%.

Perhaps mod-inventory-storage's increase CPU is also due to an increase in memory usage. This indicates a memory leaks. Heap dump shows a leak of io.vertx.core.impl.DuplicatedContext. See MODINVSTOR-751 - Getting issue details... STATUS . Other modules' did not exhibit similar traits of leakage.

The graph below shows tests comparing CPU utilizations of modules involved in the check-in/out workflow among 6 short 30-minutes tests.

The graph below shows the memory usage of check-in/out modules in the short 30-minutes tests. No memory leaks observed in these short tests.

Juniper seems to be using memory quite aggressively for 8 users tests and certainly 20 user tests. Below is the freeable memory graph comparing the 1, 5, 8, and 20 users 30-minutes tests. When each test runs there is a steep drop off follows by a gradual decline of memory consumption.  When the test is over the memory is returned to the pre-test level of 7GB.  What to note here is that in 30 minutes, even a 5-users test consumes more than 1GB of memory, 8 users nearly 2GB, and 20 users is 2GB.

Meanwhile the DB's CPU utilizations are as follows for this set of tests: 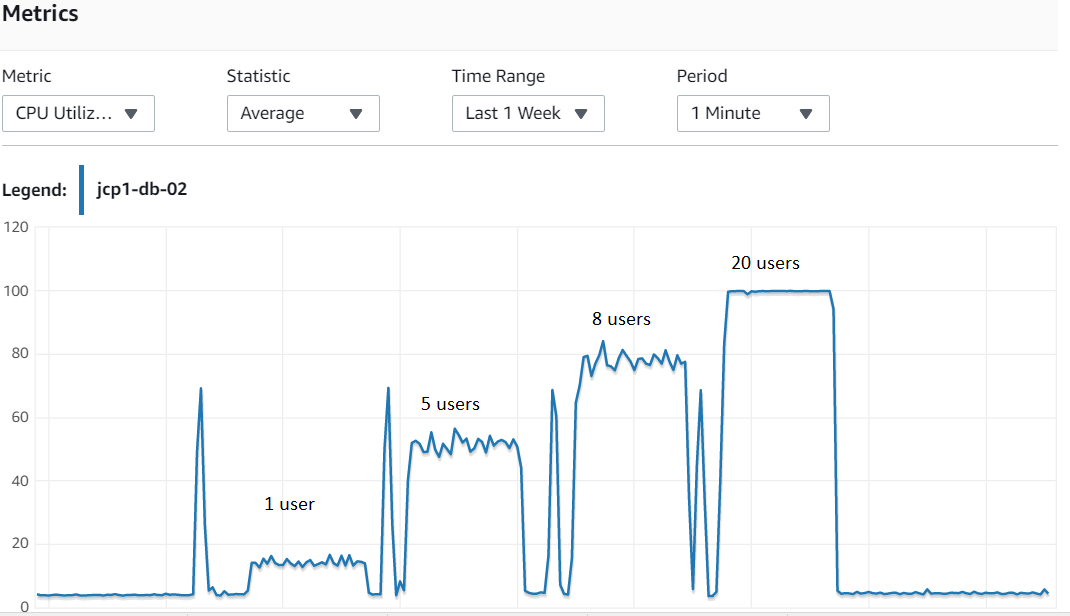 With 5 concurrent users the DB's utilization rate is already averaging 50%, 8 users nearly 80%, and 20 users at 100% but clearly it needs more CPU resources than what is available for it.

Following the trends above, the 20 users 24-hour longevity test comes out like this:

In this graph the database started out with about 7GB and in less than 3 hours all memory was used.  The DB tried to recover with spikes for about 4 hours, then it crashed and restarted itself memory level resetting at 7GB. This time it took less than 2 hours for the memory to be exhausted. The DB once again restarted and about 2 hours latera final crash. The 24-hour ran for about 15 hours.

DB's CPU utilization rate is pegged at 100% for most of the test duration, only comes down when the DB crashed. 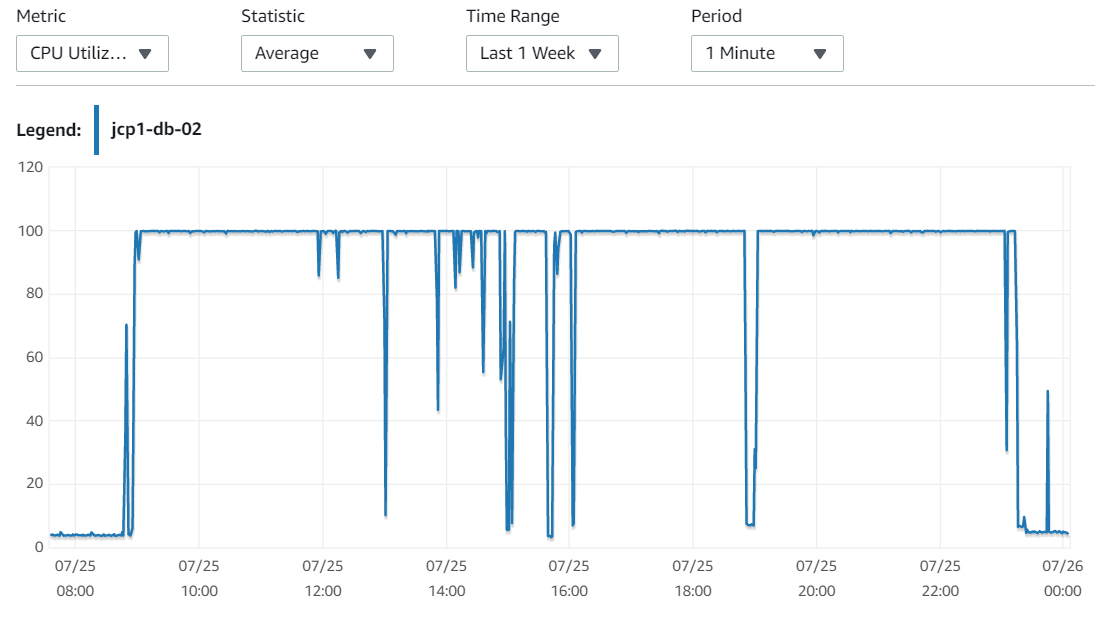 The database logs show the following queries being notoriously slow:

To calculate the user summary the code fetches all events for a user, sorts them by time, and creates a summary of it: rebuild source code

If there were 5000 loans during the last 20 years for the given userId all 5000 item_checked_out_events are loaded and processed.

One possible way to improve the performance: For each user store the timestamp of the latest event that has been processed at the last user summary calculation. Next time when rebuilding the user summary only fetch new events (events after that timestamp). To make this fast create a combined index userId + metadata.createdDate and use a special SQL query jsonb->>'userId'=$1 AND (jsonb->'metadata'->>'createdDate')::timestamp > $2

Searching item for barcode=="13137881" already has a correct b-tree index (schema.json) since March 2019 (MODINVSTOR-269). If it takes 606 ms this is probably caused by database server overload. We may get a slight speedup by changing the b-tree index into a unique b-tree index (MODINVSTOR-523).